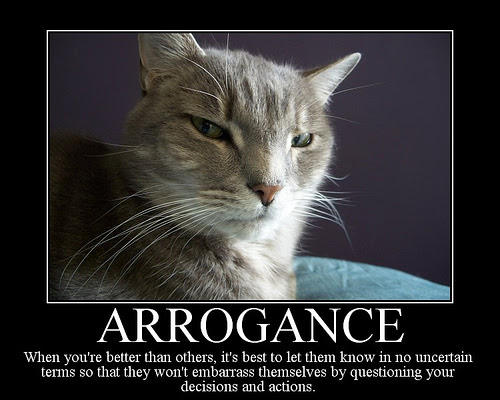 This is one of the most frightening statements from a doctor I've ever heard: "If we weren't this arrogant, we couldn't do our job." That is just baffling to me. When have you ever heard, "humility goes before the fall..."? That's just not how it works. I understand that what doctors do is scary and taxing. It's difficult to know where to draw emotional boundaries. The landscape is fraught with danger and certain risks must be taken. That takes courage, true. But courage can be present with humility. There doesn't need to be the god-like attitude of "I know...." It's arrogance that doesn't let us see mistakes, even as we're making them. Arrogance doesn't listen. Arrogance instructs: "Who are you to tell me that I'm wrong?" But I've never known any degree, any amount of schooling to make a person immune from making mistakes. That just doesn't happen. Even a doctor can misplace their house keys.

Doctors are said to be some of the worst patients, and it's largely to do with that arrogance. As one doctor put it: "I didn’t tell the doctors all of my symptoms and the events surrounding them. Without even thinking about it, I only told them what I thought was relevant. In fact, a common mistake we doctors make is getting too attached to the first diagnosis we think of, and then failing to ask about other symptoms, other clues.” (Doctor's 'Worst Ever' Headache, and Learning the Patient Story) He was lucky in that they were able to reach the right diagnosis anyway, but how quickly could they have been thrown off track? "You know, most doctors are taught that if a patient says "the worst headache of my life," then it's a subarachnoid hemorrhage until proven otherwise. That means a bleed in the brain, usually caused by a ruptured aneurysm. But I knew something like that couldn't happen to me. And anyway, while I suppose technically this could be the worst headache of my life, it really wasn't that bad. I mean, technically everyone has had the worst headache of their life, right?" This doctor's "knowing" could have cost him his life.

Another doctor describes her experience in missing her son's farsightedness: "It’s really easy to get sure of yourself as a doctor, especially when you’ve been doing it for a while—and especially when you have lots of patients to see. It’s easy to say: I know this. I’ve seen this before; I know what to do. Been there, done that. Usually, it works out. But sometimes, it can make us miss things we should see. ...We tend to think of humility as an optional virtue. Humble people are admirable and all that, but we think of humility as something that can get in the way of excellence and achievement." (It’s only through humility that we can achieve great things) But that couldn't be farther from the truth. It's only when we believe that we don't know everything that we are willing to investigate. In her arrogance over the situation, she even started to think her son was acting badly on purpose instead of inquiring about a possible cause.

Arrogance places an immediate wall in doctor-patient communication. "Most patients still believe that physicians still provide what the ethics of medicine requires us to: “consideration, compassion and benevolence for our patients”. They come to the doctor with the expectation that they will get to tell their story and be heard. That they will enter into a discussion with their doctor about the risks and benefits of certain tests, therapies and alternatives. That their physician will help them, as a patient, make their own best decision for themselves and be comfortable making that decision. ...Unfortunately the healthcare experience for many is quite the opposite. The doctor gives a patient an order that is expected to be followed. Patients that don’t follow these orders are branded “non-compliant” and often excused from the practice." (Find a physician, not a general) Instead of cooperating with the patient and working to find better solutions that work for both parties, it becomes a lose-lose situation for everyone.

The power lies with doctors. "Conventional wisdom [says] that the key to fixing health care begins and ends with changing patient behavior. If only we could get patients to be more compliant, if only patients would do what I tell them, blah, blah, blah. ...If you were to believe the admonitions of the NIH, AHRQ, hospitals, pharma and every WebMD-look alike, you would think that patients these days would be more involved in their visit... asking questions, sharing information and making decisions. But as most physicians will attest... most patients don’t have much to say in the exam room anyway. And the longer they have to wait before being seen, the less patients are likely to bring up the few questions they wanted to ask. This is a huge problem." (The Fastest Way To Disempower, De-Activate, and Disengage Any Patient)

Allowing arrogance allows a culture of abuse to exist. "A nurse I know, attempting to clarify an order, was told, “When you have ‘M.D.’ after your name, then you can talk to me.” A doctor dismissed another’s complaint by simply saying, “I’m important.”" (http://www.nytimes.com/2011/05/08/opinion/08Brown.html?_r=1) Far more than just inappropriate behavior in the workplace, this arrogance has real impact on patients' well-being. "Recent studies suggest that such behavior contributes to medical mistakes, preventable complications and even death. "It is the health care equivalent of road rage," said Peter Angood, chief patient safety officer at the Joint Commission, the nation's leading independent hospital accreditation agency. A survey of health care workers at 102 nonprofit hospitals from 2004 to 2007 found that 67 percent of respondents said they thought there was a link between disruptive behavior and medical mistakes, and 18 percent said they knew of a mistake that occurred because of an obnoxious doctor. ...Another survey by the Institute for Safe Medication Practices, a nonprofit organization, found that 40 percent of hospital staff members reported having been so intimidated by a doctor that they did not share their concerns about orders for medication that appeared to be incorrect. As a result, 7 percent said they contributed to a medication error." (Doctors behaving badly) All of that could have been prevented with just a slight attitude adjustment.

Additionally, not admitting to mistakes or trying to cover things up after the fact only makes it worse. "University of Illinois law professor Jennifer Robbennolt has done a series of studies that show apologies can help resolve legal disputes in cases ranging from medical malpractice and divorce and custody to disputed dismissals and personal injury. “Conventional wisdom has been to avoid apologies because they amount to an admission of guilt that can be damaging to defendants in court,” says Robbennolt, who surveyed more than 550 people about their reaction to apologies offered during settlement negotiations in a hypothetical injury case. “But the studies suggest apologies can actually play a positive role in settling legal cases. ...The apology fulfills some of the goals that triggered the suit, such as a need for respect to assign responsibility and to get a sense that what happened won’t happen again. So receiving an apology can reduce financial aspirations and make it possible for parties to enter into discussions about settlement.”" (Sometimes, an apology can deter a lawsuit)

Admitting mistakes, rather than running from them, is even good business. "After health care providers began admitting mistakes, apologizing and offering compensation, the monthly rate for new claims fell from just over seven per 100,000 patient encounters to 4.52 per 100,000, or 36 percent. The average monthly rate of malpractice lawsuits filed against the hospital fell by more than half, from 2.13 per 100,000 patient encounters to 0.75 per 100,000. The median time it took to resolve claims also dropped by several months, while the mean costs for liability, including compensating patients and paying attorneys, fell by about 60 percent. The average cost for lawsuits that were filed decreased, from nearly $406,000 to $228,000." When Doctors Admit Mistakes, Fewer Malpractice Suits Result, Study Says.

Conversely, when arrogance is tolerated, the consequences can be staggering. "In Anonymous Parents and Deceased Five-year-Old Girl v. Anonymous Obstetrician and Anonymous Hospital, the plaintiffs alleged their infant developed cerebral palsy after a difficult labor and delivery. Deposition testimony of the labor and delivery nurses indicated they were concerned about the lack of progress of the mother’s labor, but they were reluctant to voice those concerns to the obstetrician because of the doctor’s well-known tendency to respond negatively to such nursing input. This North Carolina case settled for $1.2 million." (Laska, L. (Editor) “Hypoxic brain damage to infant”, Medical Malpractice Verdicts, Settlements, and Experts, pg. 34 March 2003.)

Arrogance isn't just bad for patients, it's bad for doctors too. "[A] cultural expectation of medicine is that providers don’t talk about our lack of knowing everything in every situation. We don’t admit our humanness, our capability of making a mistake. We don’t want to seem weak in front of our peers. So we isolate ourselves, and this is never more evident than when we feel we have made a mistake. Instead of getting the necessary support from our colleagues, we keep quiet and go about our business as though nothing has happened. By doing so, we are shutting down emotionally and not allowing healing to take place." (The culture of medicine needs to change) How can anyone learn from, or heal from, making a mistake if they can never admit it? An opportunity for growth and improvement is turned into one of shame and secrecy.

We all know pride goes before the fall, yet somehow we all still fall prey to it. One reason for this may be simply because it's more comfortable. "It’s much harder to go into things realizing that every day, every moment, every child or patient is new. Going into everything with a clear eye, mind, and heart is so much more work—and means acknowledging that there is so much we don’t know. In fact, it means focusing on what we don’t know—and who wants to do that?" (It’s only through humility that we can achieve great things) Believing that we know what's going on, whether we truly do or not, feels more confident, more empowered, more capable. The trouble is, feelings aren't facts. We can feel totally right when we're absolutely dead wrong (sadly, no pun intended).