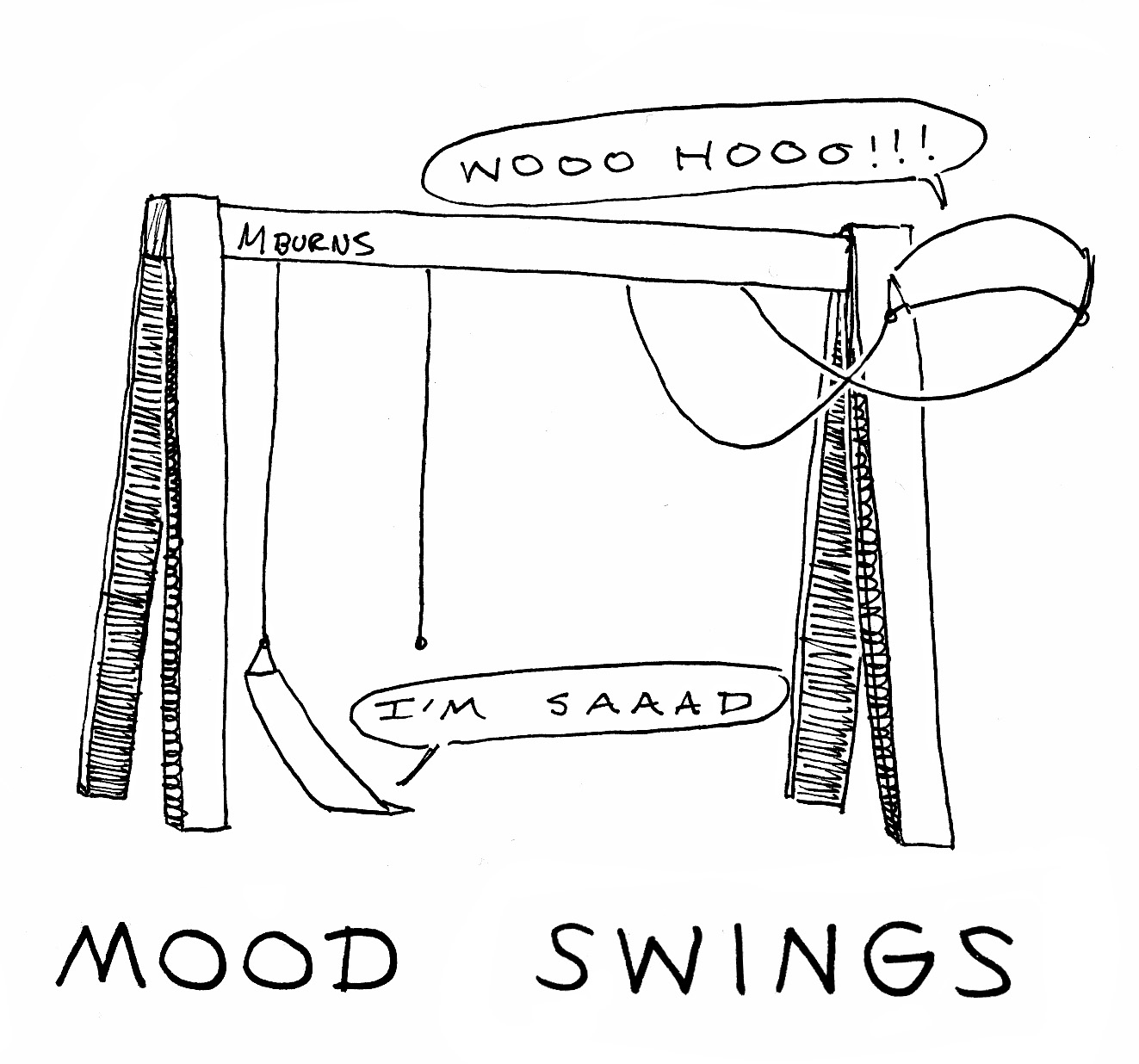 Migraines are very interesting things because it's an attack on the whole nervous system. Migraine effects the whole body, and included in that is mood and behavior. One friend of mine became apologetic when he got his migraines. He couldn't stop apologizing for himself and thanking people. Beyond my strange cravings (cigarettes---the real kind---not the e-kind, Red Bull, chocolate, super-sugary candies), I have mood swings from here to Egypt. I can get super creative, sexually aggressive, and love the world (also known as hypomania), I can have panic attacks that freeze all decision making, or I can have deep, suicidal depressions. None of this is controllable through medication. I'll explain some of the reasons why.

"Disturbances in serotonin levels are associated with most headaches. In migraines, serotonin levels increase before onset and then decrease during the headache phase. In chronic tension headaches, serotonin levels remain low all the time. As a result of lower serotonin levels, nerve impulses move along the trigeminal nerve to blood vessels in the meninges, the brain's outer covering. This causes blood vessels in the meninges to dilate and become inflamed and swollen. The result is a headache."
- Phyllis A. Balch, CNC, Prescription for Nutritional Healing, 4th Edition: A Practical A-to-Z Reference to Drug-Free Remedies Using Vitamins, Minerals, Herbs & Food Supplements

The initial burst of serotonin causes hypomania and/or panic attacks. There are short-acting drugs for the panic attacks, but no short-acting medications for hypomania. The subsequent lull in serotonin causes the suicidal depressions. There are no short-acting medications for that either. Additionally, drugs like SSRIs are useless. These drugs try to preserve the brains supply of serotonin by preventing re-uptake of serotonin by the cells. But when the brain is dumping it's supply.... That's like putting a lid on a bucket of water to try and keep the water from splashing out, when there's a hole in the bottom of the bucket. Most migraine abortive medications---the class of drugs known as the triptains---are serotonin-like molecules. They stop the migraine by "resupplying" the brain and the blood with molecules that look like serotonin.

Well, that's not exactly true. The triptains stop part of the migraine, but not all of it. Migraine actually starts deep in the brain stem, and "consistent with previous work, the [brainstem] activation persisted after pain was controlled by sumatriptan," one of the triptains (S. K. Afridi1, M. S. Matharu, L. Lee, H. Kaube, K. J. Friston, R. S. J. Frackowiak and P. J. Goadsby, "A PET study exploring the laterality of brainstem activation in migraine using glyceryl trinitrate," Brain, Volume 128, Issue 4, pgs. 932-939). Meaning, the triptains can take the migraine pain away, but that doesn't mean they've taken the migraine away. Which is why a lot of people experience a "rebound" headache (not really a rebound, since it's the same headache!) once the triptain wears off.

It's completely normal to expect with all this wacky brain chemistry going off, that besides the pain, there's going to be an emotional component. (Pain, itself, provides its own emotional components, triggering "fight or flight" emotions such as aggression or apologizing.) There are going to be mood swings as there are brain chemical swings. And since all this also kicks off the autonomic nervous system by causing physical stress on the body, the migraineur's ability to handle external stress is taxed. Now add to this that some people's migraines have tripped over into lasting every day... Sometimes for decades (I'm looking at you Kerrie Smyres)... Then emotional stability becomes something of an Olympic sport!

So goes the strange behavior of migraines. It's like mini-bipolar with pain, nausea, and a host of other symptoms (including, sometimes, loss of language skills and balance). Fun times! @.@

So What Do We Do About It?

First, we have to practice detachment, and remember that feelings are not facts. Just because I feel up or down, doesn't necessarily mean anything more than a brain malfunction. I need to measure the situation against reality and see if things check out. And even if they do check out, that doesn't then mean I get to go running down the field with my emotions. It means I think about the best possible outcome for the situation and taking aim for that. Have I a right to be angry? Sometimes, absolutely! But that doesn't mean it's a good idea for me to get angry; that has negative, physical side effects, plus it clouds my vision to opportunities---they're harder to see when I'm angry and it's easier to slip into self-pity.

We've got to practice positive thinking, daily, to stay strong. I'm not talking Pollyanna-type, sun-shiney, sugary sweet, bullcrap. I'm talking real soul-searching, find the good in this (even if you have to dig a mile down for that diamond) type positive thinking. One: Remember that your suffering can be used to help other people with their suffering. Two: Recognize that you are a survivor, even though you were drafted and didn't have a choice in the matter. Three: Recognize that you are learning to manage something that no one would choose for themselves; this isn't extreme-sports, weekends-only heroics---this is the real deal. Four: We have a unique wisdom about the frailty of human bodies, human minds, human promises, human technologies, and human institutions; we can appreciate when things work, that much more. Five: We have a unique ability to be there for other people like us (there is an understanding---a kinship). These are just a few automatic wins. These are the thoughts we can repeat to ourselves in the dark times so that the suicidal depressions don't end up in suicide. These are some of the reasons we have value as human beings, despite being sick. We have these values as a result of being sick!

Next, we need to use these values to re-frame or thinking about ourselves. We aren't just patients, we're healers, too---healing the hearts of others like us. We're not alone in our suffering, though it may be lonely and isolating. We're diplomats, extending the welcome to others with conditions like ours. We're educators, informing the public of scientific, medical, and political matters. We're activists, raising awareness for people with our condition. We're researchers, spending countless hours on the internet looking up patient information. We're project managers, administrating the near full-time job of records, medications, symptom-tracking, billing, insurance claims, etc., etc. We may be a miserable pile of pain-ridden goo, but we are at the same time, absolutely amazing. Our diseases may limit what we can do, but it doesn't limit who we are.

It's easy for us to lose sight of our worth, especially when migraines are so crippling. So remind yourself of your value from time to time. Be kind and forgiving towards yourself, like you would a sick child. Comfort, but don't spoil. We must be careful today to make a good tomorrow. We must forgive ourselves when we fall short. We must try when we have the strength and rest when we do not. Additionally, don't think that you lose worth from being sick. Our disease is nothing to be ashamed of, period. I don't care if you have migraines from a self-induced head injury. No one says, "Race you to the first neurologist's visit!" It's not the mistakes we make, it's our recovery from them that counts. That we're walking the road of dealing with a chronic illness has merit in itself, regardless of source.

Practicing these thought exercises helps shore up our emotions, so when those big depressive storms come, we can remind ourselves of the good things, and hold on until the storm passes.